Edward (Ted) Brister was a fighter pilot in the Western Desert, Malta, Sicily and Italy. He also trained Gunners in Palestine . He had intended to enter dentistry, but in September 1940 witnessed the bombing of the London Docks,  inspiring him to become a pilot. He joined up on his 19th birthday, February 11th 1941, . He did his basic training in Blackpool, and then continued training at various places across the UK. He eventually ended up in South Wales, where he began flying Spitfires.  He joined a squadron in Scotland and was posted to the Middle East, which meant travelling to West Africa and crossing the continent to Egypt. He was in the Desert Airforce in the Western Desert, based in Tunis from 1942 to May 1943.

He then went to Malta, defending the island and making sweeps to Sicily, in enemy territory. He then went to Sicily in about July 1943, where he operated from the edge of a landing strip. In September he went to mainland Italy on the Adriatic coast, and later went to Palestine. Ted took many photographs during the war, which he generously shared with the us at Living Archive. They are used throughout this website, and  selections from the albums are shown here. Sadly, Ted died in 2008.

In these excerpts from his interviews, Ted describes the bombing raids that inspired him to join up, as well as the experience of his instructor being killed, the role of fear in combat, the Bible he always carried with him on missions, and what he was doing on VJ day. 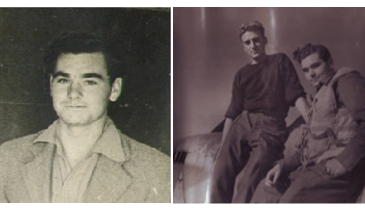