He went to college in London and went on to work as a short-hand typist in London.

When the Second World War started he joined the Navy and was posted to HMS Echo as a coder and cipher decoder. Whilst on HMS Echo he was awarded: The General Service Medal, The Atlantic Star, The Africa Star, The Burma Star, The Italian Star, The Victory Star, The Empire Medal and The Red Star. He later served with the Australian Navy as one of the few “Pommies” aboard HMAS Wollongong.

After the war ended he returned home and met his future wife, the sister of one of his war friends, and settled down to live with her in Feltham before he moved back to Kington. 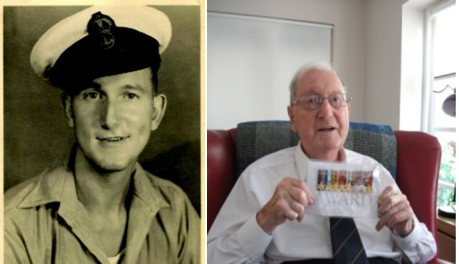